Posted by missFrill at 8:27 PM No comments:

The news was scrubbed outside of Hong Kong even though CBS, CNN etc. etc. all were there, fresh from seeing their colleagues beaten up out on the streets by brutal HK police.


Posted by missFrill at 2:04 PM No comments:

Several now-censored reports from the 1990s and early 2000s reveal that Prince Andrew’s involvement with the minors exploited by Jeffrey Epstein is greater than previously believed.

Posted by missFrill at 2:00 PM No comments:

For their unorthodox views, some physicians are being treated as medical heretics. Google’s search engine algorithm has essentially ended traffic to their websites...

Posted by missFrill at 11:50 AM No comments:

WANTED by the F.B.I.: Everyone Critical of the F.B.I.

Google is blocking results for 9-11 topic searches . . .
Posted by missFrill at 9:41 AM No comments:


(Natural News) The video platform Vimeo has banned Project Veritas and Natural News on the same day, taking part in the criminal collusion among tech giants who are systematically silencing independent journalism that keeps exposing the criminality of the tech giants themselves. . .  (more)


nukepro.net  had many good articles on Fukushima radiation etc.
Posted by missFrill at 3:13 AM 1 comment:

The largest Donald Trump forum on the internet is “quarantined”

One of the worst examples of censorship in US history - Dr. Wilhelm Reich MD And Nicolas Tesla Discovery


" . . . Despite his ground breaking and life affirming breakthroughs and discoveries, and maybe because of them, Dr. Reich MD was censored and then thrown in prison along with another medical doctor, where he died. By order of the court, all six TONS of this writings, research manuals and books were destroyed, and at his own cost, which is one of the worst examples of censorship in US history. Just like the discoveries of Nicolas Tesla, their inventions and discoveries were a threat to the monopoly powers that were present then and even up to today."
Posted by missFrill at 10:40 AM 1 comment:


Epic Sellouts hated celeb gender-imitators and nutty looks-obsessed famous hoi polloi  and compared photos of them.
Thanks to voat.co some of his recent posts are mirrored on the web.

Oprah the Deceiver - many photos
https://www.invidio.us/watch?v=6q_oittVEPU

Forbidden on the internet: Discussing the risky Oroville Dam

Internet Censorship Cranked Up to High on Oroville Dam Topic

You Tube doesn't want you to find extinction rebellion's channel

They may shut down Heathrow Airport in a few hours ....


Posted by missFrill at 7:50 PM No comments:

Sleezy pizzagate star, John Podesta crawled out from under a rock to attack the Mueller Report findings on this CBS News interview.  His feathers are ruffled because the whole "blame-Russia" thing was probably his idea in the first place as he is still doing PR for his client, Hillary Clinton.

CBS points out he is head of this group, Center for American Progress (a re-elect Hillary sleeper cell).  So we took a look at their website.
On the front page it shows their big concern is these pesky, dangerous RIGHT WINGERS.

They must be stamped out and they keep on using this dangerous FREE SPEECH thing to get their point across.
America must wake up and get rid of this First Amendment ASAP, he says.


From their article Confronting the Domestic Right-Wing Terrorist Threat:

4. Call out rhetoric that radicalizes

Political radicalization that leads to violence does not happen in a vacuum. Overheated rhetoric, promotion of conspiracy theories, and demonization of minorities can and has encouraged violence. The Tree of Life gunman Robert Bowers, for instance, regularly trafficked in antisemitic conspiracy theories on extremist websites. In his last post before the attack, he accused a Jewish-run refugee charity of bringing “invaders in [to the United States] that kill our people.” This echoed the rhetoric of the great replacement theory of the right-wing, anti-Semitic identitarian movement, which claims that a secret conspiracy aims to replace white Europeans with alien others as part of a plot to destroy Christian, European culture.”18 The First Amendment provides broad protections for the freedom of speech, but that does not mean that inflammatory, violent, or hateful speech does not deserve scrutiny. Congressional hearings on the dangers of far-right extremism should examine what role political rhetoric has played in its rise.

This year has seen a long overdue focus on reducing online radicalization. Social media companies have finally begun to respond to public pressure [sic]  to remove content that incites violence. In addition, payment, hosting, and other platforms have declined to serve extremist clients. The social media activism organization Sleeping Giants, for example, tried to convince advertisers to blacklist far-right extremist websites as well as to pressure YouTube to remove advertising from racist content, preventing the far-right groups from earning revenue from their propaganda. These efforts can go a long way toward breaking the cycle of online radicalization and are worth exploring further. There may also be avenues for collaboration between the government and the private sector in order to create a safer online space while respecting free speech rights.

6. Ensure that law enforcement has the tools it needs to combat domestic terrorists

When a new threat emerges, it is only sensible to review the existing tools that law enforcement can use to make sure that they remain relevant and useful. After the Oklahoma City bombing, for example, the FBI focused effectively on the threat from the far-right to head off future attacks, suggesting that, at the time, its tools and authorities were sufficient to handle the problem. After 9/11, the United States developed a broad set of counterterrorism tools. Some of these tools may be relevant in the domestic context, but many were aimed at a different type of campaign in ungoverned spaces. There may well be existing tools, techniques, and authorities that could be helpful in the fight against far-right violent extremism while respecting civil rights. Collaboration across agencies that are focused on domestic and foreign threats may provide useful insights in tracing financial, operational, and ideological cross-border links.

This piece of slime is using the Anti-Defamation League for its sources on right-wingism.

Censorship Ramped Up Down Under

Posted by missFrill at 12:43 PM No comments:

From Lift the Veil

Wordpress is afraid of history

The boot of repression is killing blogs – Dublinsmick goes missing

Posted by missFrill at 4:01 PM No comments:

Email ThisBlogThis!Share to TwitterShare to FacebookShare to Pinterest
Labels: censorship

Big Brother is Everywhere on the Internet

Google's You Tube Clumsily Tries to Prop Up Has-Been, Jusse Smollett ... even AFTER his arrest(!) 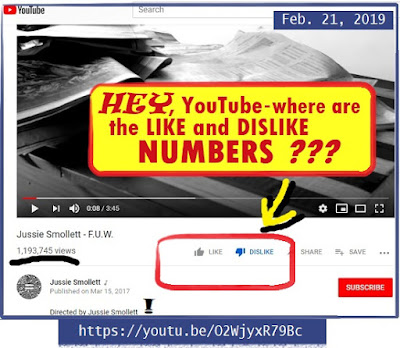 see his last noose-featuring music vid.
Posted by missFrill at 2:49 PM No comments:

So everyone knows what the thought-police want to suppress - 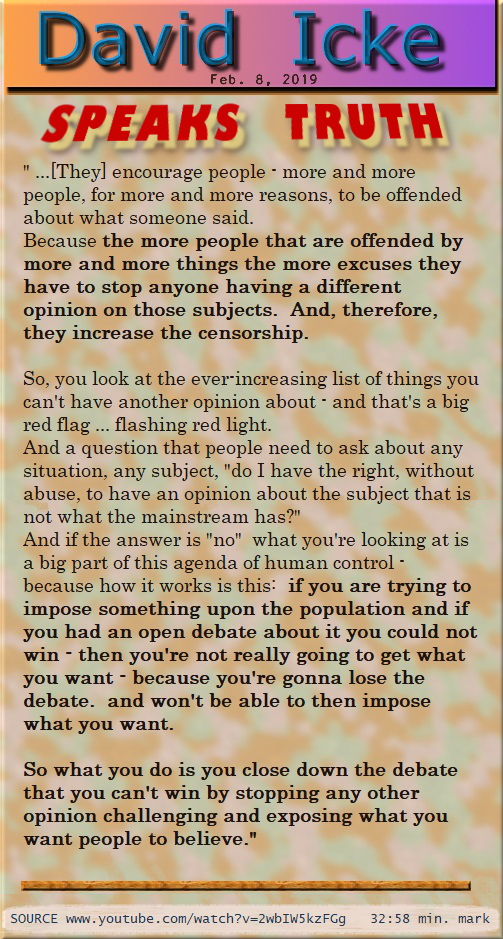 All about the ban of David Icke in the next post

It's not enough to push out all sorts of lies as "news" and ban everyone with another narrative from social media - now they are just trying to muzzle everyone. They start with the big  fish.


He's not for everybody but he clearly doesn't engage in illegal speech like inciting murder and such. And people don't ask for their money back after his talks.  He just sells out the next venue with twice as many seats. Maybe a little uncomfortable for parasite royals.


Posted by missFrill at 6:54 AM No comments:

Posted by missFrill at 4:14 PM No comments:

Support Roger Stone - even if you have to hold your nose

The attack on political operative, Roger Stone looks more and more contrived by the corrupt DoJ and FBI.

We are not fans of Roger Stone's political views, but if he is silenced, we all will be soon.

Posted by missFrill at 2:22 PM No comments: