It might be a DDOS attack or other outside hack. The website 'Is It Down Right Now?' says it is offline for maintenance. 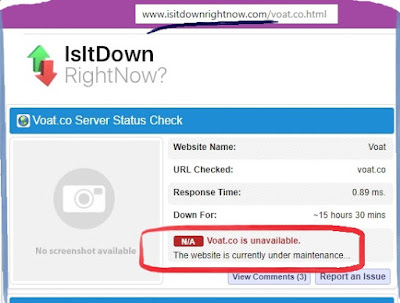 People are talking about it at 8-Chan.

In 2015 they were dropped - Guardian article.

Email ThisBlogThis!Share to TwitterShare to FacebookShare to Pinterest
Labels: voat, voat is down

ON THE GROUND IN SYRIA - REMOVED FROM YOUTUBE
VIDEO -
https://www.bitchute.com/video/O6MsqEpDXgh6/

Posted by missFrill at 9:44 AM No comments:

Lots of Censorship Over Syria Topic This Week

Watch: Former Head Of British Armed Forces In Iraq Tells Truth About Syria, Is Cut Off By Sky News

Popular YouTube channel reporter, Sane Progressive no sooner reported on the sham chemical attack story featuring a reporter in Syria than her entire show was deleted from You Tube!
http://www.youtube.com/watch?v=pCUKXx4tjnI

Posted by missFrill at 7:20 PM No comments:

"Two interesting sites here to keep you informed of the current censorship and surveillance carry ons with these two sites. MeWe is an alternative to FB. I note folk are joining up, now fed up with FB. I’m finding it disturbing all the info that is now being uncovered regarding these two."

Since late 2016, the New York Times, working together with the US intelligence agencies and the Democratic Party, has been engaged in a campaign to promote internet censorship


The New York Times takes on the social media "hordes”

" . . .  the Times, for the most part a clearinghouse for staid and predigested state propaganda, is seeking to carve back market share it has lost to online publications that carry out genuine investigative journalism and oppose the lies peddled by the US government and media.
In recent months, this campaign has entered a new and malignant phase. Increasingly dropping the pretext of “Russian meddling,” the Times is now directly attacking its main target: the fact that the internet, and in particular social media, helps empower the population to access oppositional sources of news and have their voices heard in public."

Posted by missFrill at 8:02 PM No comments: